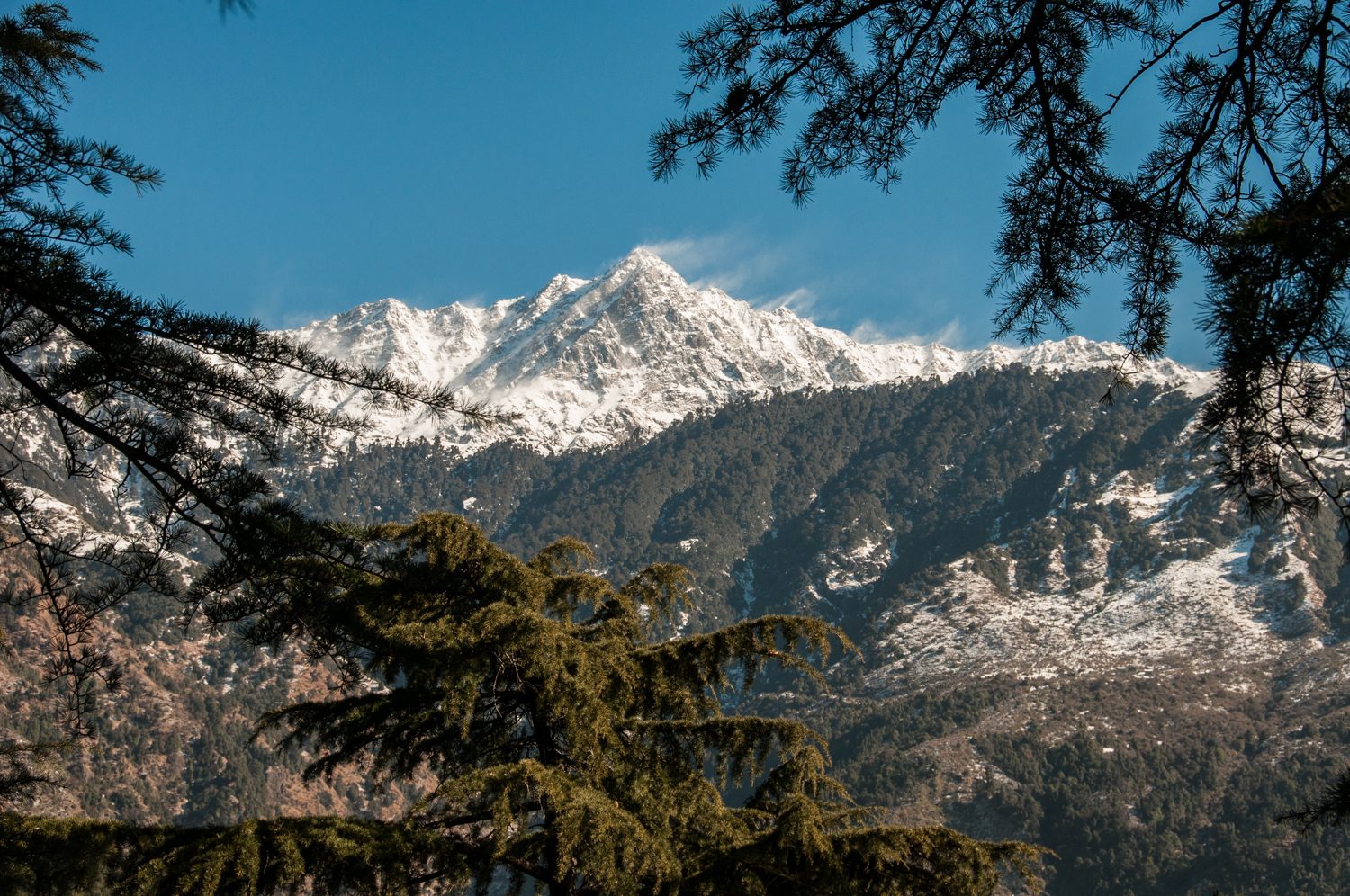 Early the next morning, we left Amritsar for our final destination, turning north towards the Himilayas – “truly the ranges where Gods reside.” Our destination was Dharamsala in the Indian state of Himachal Pradesh, home to His Holiness the Dalai Lama, leader of the Buddhist religion, who fled here in 1959 when the Chinese invaded Tibet. As soon as we crossed the state border, where we had to pay a $10 tax to enter, the plains of Punjab dropped behind us and we began the almost mile high climb on well-worn roads and hairpin turns with sheer drop-offs. We were greeted with stunning valley and mountain views as giant cloud shadows rushed over them. Almost six hours later we were relieved to reach our destination.

We arrived at the hill town of Upper Dharamsala, known as McCloud Gunj. A vastly different atmosphere from any other place on this trip pervades this town. After the intense Amritsar experience, we welcomed the chilled out tempo. Resembling a Tibetan village in its topography, architecture, the ethnicity of its residents and their clothing, it’s also famous as a backpackers’ destination, with its funky, kind of scruffy scene of cheap lodgings and Tibetan eateries and myriad craft stores and makeshift stalls. The ubiquitous weather-worn female Western-style half-mannequins were a hoot. Dharmsala’s reputation as a hippie haven of bygone decades is evident and still celebrated.

Most importantly, it is a religious center, attracting Buddhists and wannabes looking to experience the epicenter of the religious practice of Buddhism outside Tibet and be close to The Dalai Lama (who was not in residence at that time). So streets are also filled with monks, nuns, and novitiates attending the schools and living in the monasteries.

It was cold. It flurried a few times. While our hotel room had magnificent views of the surrounding valleys and villages perched on mountain sides, the lobby and hallways were unheated, as were restaurants and most buildings. So we wore our layers of clothing most of the time. The weather changed radically from one moment to the next, as it does this high up, clouds and snow blowing through the streets, then sun breaking through and bathing the town in brilliant light.

We wandered the steep lanes, some rutted and muddy, buying handmade scarves, hats, and jewelry made in other Himalayan regions and brought there for market. We visited The Dalai Lama’s compound built thirty years ago, a modern, simple structure of several levels designed in a functional, almost industrial style, with its two temples, a school, and residences for its novitiates and religious visitors. Like the mother holding her girl to spin the dozens of prayer wheels around the temple, I spun the wheels to accumulate wisdom and merit and get rid of bad karma. A startling piece of sculpture carved into rock of faces and raised fists next to an obelisk honored monks who had immolated themselves as a protest to Chinese tyranny in Tibet.

The most interesting site was the Norbulingka Institute, established in 1988, and dedicated to handing down traditions and restoring standards by providing training, education and employment for Tibetans. Beautifully designed by a Japanese architect, it promotes the creation of Tibetan art and culture through classes in many art forms, especially Thangka painting, an elaborately designed Tibetan Buddhist painting on cotton or silk appliqué, depicting a deity, scene, or ritual symbol representing the universe.

The stay in Dharamsala was a relaxing way to finish a five-week journey. The last morning, our 1-1/2 hour flight to Delhi was cancelled, so we hired a van and driver for an exhausting 11 hour drive to the capital (Air India again!!), where we spent a day shopping, before our trip home by way of Doha, Qatar. I am blessed to have been able to experience this incredible journey with my partner Rick and our traveling buddies Eva and Suresh.

Now to plan for a new adventure!

Cuba: Santiago — A City of Rhythms
Scroll to top