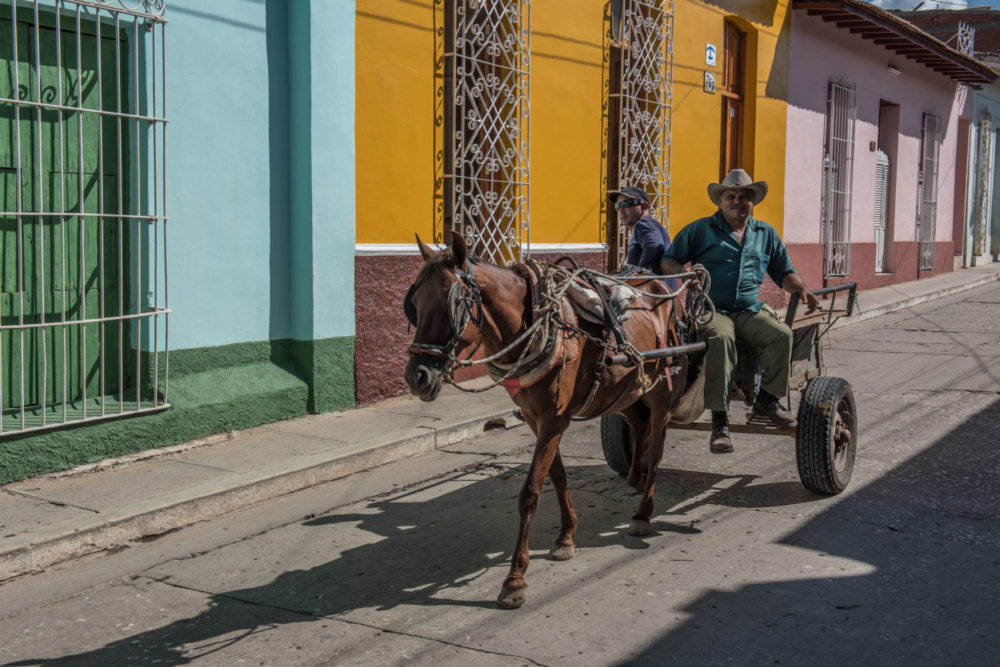 Back in the Hyundai with Umberto at the wheel the next morning, we left Camaguey and headed for Trinidad de Cuba on the central southern coast, the city that time has passed by. As we approached several hours later, the climate and land changed to humid air and verdant, rolling hills, where we experienced our first tropical downpour of the trip. Trinidad (yes, also 500 years old) apparently has changed little architecturally in the last few centuries. One to three-story buildings, red-tiled roofs, and curving cobblestoned streets reminded me of the towns and villages in the Oaxaca region of southern Mexico.  There are streets of simple, almost adobe-like structures of a long ago time, yet charming and rustic. Still, it’s on the tourist loop, so restaurants, bars, and shops were plentiful. 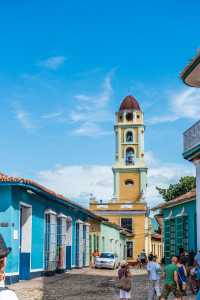 Our hosts live in an unlikely part of town for visitors, yet they were warm and welcoming. Twenty year-old Davis is studying architecture and English at the University.  He was excited that Americans were guests in their recently renovated apartment with a breakfast balcony overlooking the street. For each of the two mornings we stayed, he brought out his notebook of English nouns and verbs to practice with us and read the lyrics to American pop songs he had copied from the radio. (He loves Nirvana, Avicii, and Hozier.) His mother Esther, who greeted us in curlers, spoke no English. His aunt Leonor, who owns the casa, spoke English and joined us for a chat about what to see and do and where to eat. 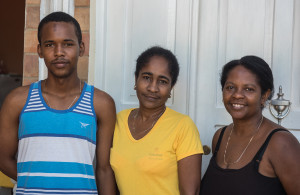 I got up early the first morning before the appointed 8:00AM English lesson with Davis to write in my journal. Sitting on the balcony, I heard a man yelling, “El pan!” Another, “El mantiquilla!” I looked over the railing and saw the men on bicycles toting crates on the back coming from opposite directions.  They were selling loaves of bread and chunks of butter to women who hailed them down from their doorways.  At 7:30am, the street was waking up – people leaving for work, street cleaners sweeping, housewives chatting, horses drawing carts of goods, even a insecticide truck spraying clouds of bug killer, the kind we kids used to ride through on our bicycles when I was young.

We did the tourist route, visiting the main church, seeing a jeep used in the 1959 revolution, plus a small speed boat from the Bay of Pigs invasion by the US.  We climbed the town’s bell tower to get a bird’s-eye view of the red tile-roofed village.  We poked into shops selling mostly souvenirs. We visited a Santeria church  to see the black Mary and baby Jesus.  Santeria is an Afro-Caribbean religion that combines mysticism, animal sacrifice, drumming and dancing with elements of Catholicism.  We stopped in the shade frequently to drink water and get out of the brutal sun.

At Lonely Planet guidebook’s suggestion, we wandered off the beaten path to a local neighborhood, where residents were hanging out, leaning against buildings or sitting on curbs. We were greeted cordially by some, cooly by others. The small stores with openings onto the streets where raw meat for sale hung exposed to air rattled my shrink-wrapped refrigerated sensibilities. 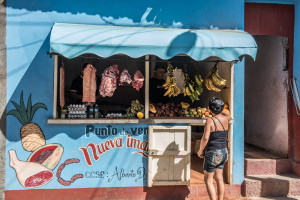 In the afternoon, Umberto drove us to a playa (beach) in the hotel area, where we experienced the clear blue bath-temperature water of the Caribbean. Traveling is hard work, and the warm water was relaxing.

In the evening we wandered towards the main plaza, and a persuasive hostess lured us into an attractive restaurant (a privately owned ‘palomar’ rather than a government-owned eatery) in what was once a grand house. Gratefully we sat at a table with an oscillating fan blowing on us as we ate tasty puerco adobo (marinated pork dish), arroz moro (black beans and rice), and tostones (fried plantains), all typical Cuban dishes. I had to have flan for dessert. A trio of two musicians and a songstress with a sultry, hypnotic voice made us forget the stifling heat.

Salsa! The music caught our ears as we left the restaurant. Paying $1 for admission, we climbed the steps to an outdoor plaza with a seven-piece band and a dance floor filled with couples executing intricate dance steps. One group of three couples danced together, smoothly changing partners in a Latin version of a Virginia reel. Who could sit still to those infectious rhythms?!

Bidding adios to Davis, Esther, and Leonor the following morning, we piled into the Hyundai to head to Havana several hours away. 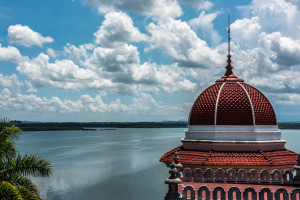 We stopped for lunch and a quick tour of the pretty seaside town of Cienfuegos.  Quiet and sort of deserted in the noonday summer sun, its well-manciured main plaza was surrounded by colonnades fronting attractive public buildings, as well as some once grand mansions, now needing refurbishment. On the harbor’s edge sat the glorious Palacio de Valle, a 100 year-old mansion in a neo-gothic Spanish-Moorish style, now an elegant hotel and restaurant with a rooftop bar and dining area that afforded a sweeping vista of the lovely bay and Caribbean sea.

We were grateful to have been able to experience these small cities and towns over four days, because it gave us a taste of life outside the hustle and bustle of urban life in Cuba.

Cuba Part II: On the Road to Camaguey