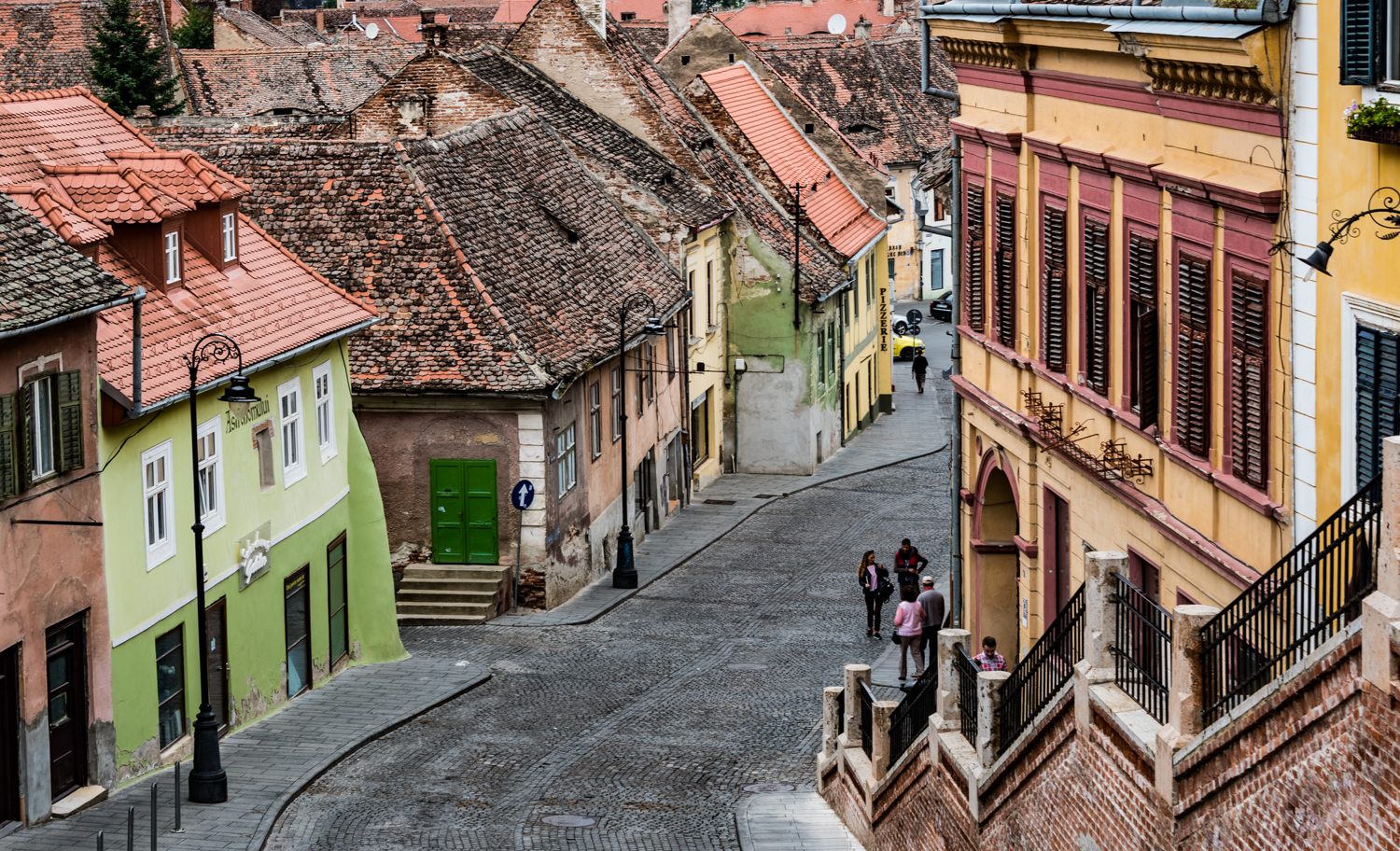 After our visit to the Palace of the Parliament, we piled into the car and headed north out of Bucharest towards Romania’s fabled Transylvania.  The city quickly gave way to countryside. 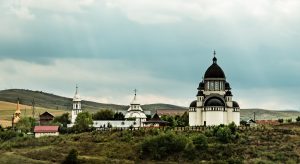 Transylvania was largely settled by Germans in the 12th century at the request of the then ruling Hungarians who didn’t care much for the native Dacians (ancestors of the Romanians).  The region is a beautiful plateau of hills and valleys, studded with small farms and fields for sheep-grazing., bordered on three sides by the magnificent Carpathian Mountains of forests and rugged landscapes.  As we drove through Olt River Gorge, the landscape bathed in the afternoon September sun evoked a Maxfield Parrish painting.

We were to spend several days in this beautiful region experiencing its many cultural treasures and visiting four very attractive cities.

As we were to learn, all of these cities have lively pedestrian promenades and central piatas (plazas) lined with shops, bars, and outdoor cafes.  In each place we learned about the centuries-old inner walled Old Towns from the Middle Ages, built to be defended against invaders, and the various cultures that occupied them over time. 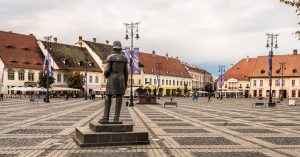 Our first overnight stop was twelfth century Sibiu, entering the upper Old Town through a barrier gate at the ancient city walls after paying a toll, to make our way to the centuries-old charming Hotel Casa Luxemburg.  With its picturesque German-Saxon architecture, Sibiu’s enormous piata includes many grand buildings and stately houses.  Sibiu served as the European Capital of Culture in 2007.

Many houses exhibit the signature unusual characteristic of the ‘eyebrow’ windows on the roofs that were created for air circulation.   Tall medieval fortress walls and towers ring the Old Town.

At night we joined locals and visitors in an outdoor café on the promenade to sample the regional beer and enjoy a dinner of mici, grilled skinless ground meat rolls of pork, lamb, and beef.  These yummy treats are as ubiquitous here as hamburgers are at home.

As we headed north from Sibiu into northern Transylvania, we enjoyed one of the most bizarre and wondrous experiences. The Turda Salt Mines, last excavated in 1932, now houses an amusement park in its spacious caverns. 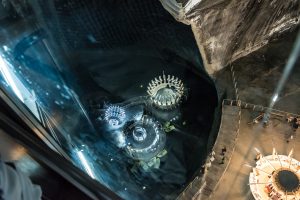 Imagine the spectacle as we descended over 400 feet in a 6-person glass elevator to the colorful lighted playground below. A ferris wheel, miniature golf, ping pong tables, ski ball, video games, a performance amphitheater, and a salt lake with rowboats to rent made up this subterranean wonderland.

The salt walls are striated with white to gray to even black streaks of salt deposits.  The walls are slick with condensation as humid air hits the salt, dripping off the ceiling in some places to form stalactites and stalagmites — and sometimes dripping on our heads. How cool was this place!

It was getting dark when we checked into the Beyfin Hotel in Cluj-Napoca. Romania’s second largest city and the unofficial capital of Transylvania is a thriving university town with a lively nightlife, impressive public buildings, and magnificent churches.  What awaited us in our hotel room was a balcony that overlooked the grand Piata Avram Iancu, offering a magical sight of the Romanian Orthodox Theotokos Cathedral, central fountain, and National Theatre and Opera House, all colorfully lighted.

The next morning we toured both the Orthodox Cathedral and the huge and architecturally impressive Hungarian St. Michael’s Catholic Church.   My fave of the visit – outside St. Michael’s, the sculpture of King Mathias (considered the greatest Hungarian king) surrounded by his four princes who ruled the territory.  Second from the right is none other than Vlad the Impaler, but we know him much better as Dracula.  (Yes, he did exist.)

Vlad earned his name for the way he treated his Ottoman army prisoners – by inserting poles into the bottom of their bodies, then staking the poles into the ground so that over hours…..  Well, you can imagine the reaction of new Ottoman forces arriving onto the scene seeing a field of several hundred of their impaled brethren.  It would make me turn around and go home!

Next:  Maramures Region – “The Old Ways”