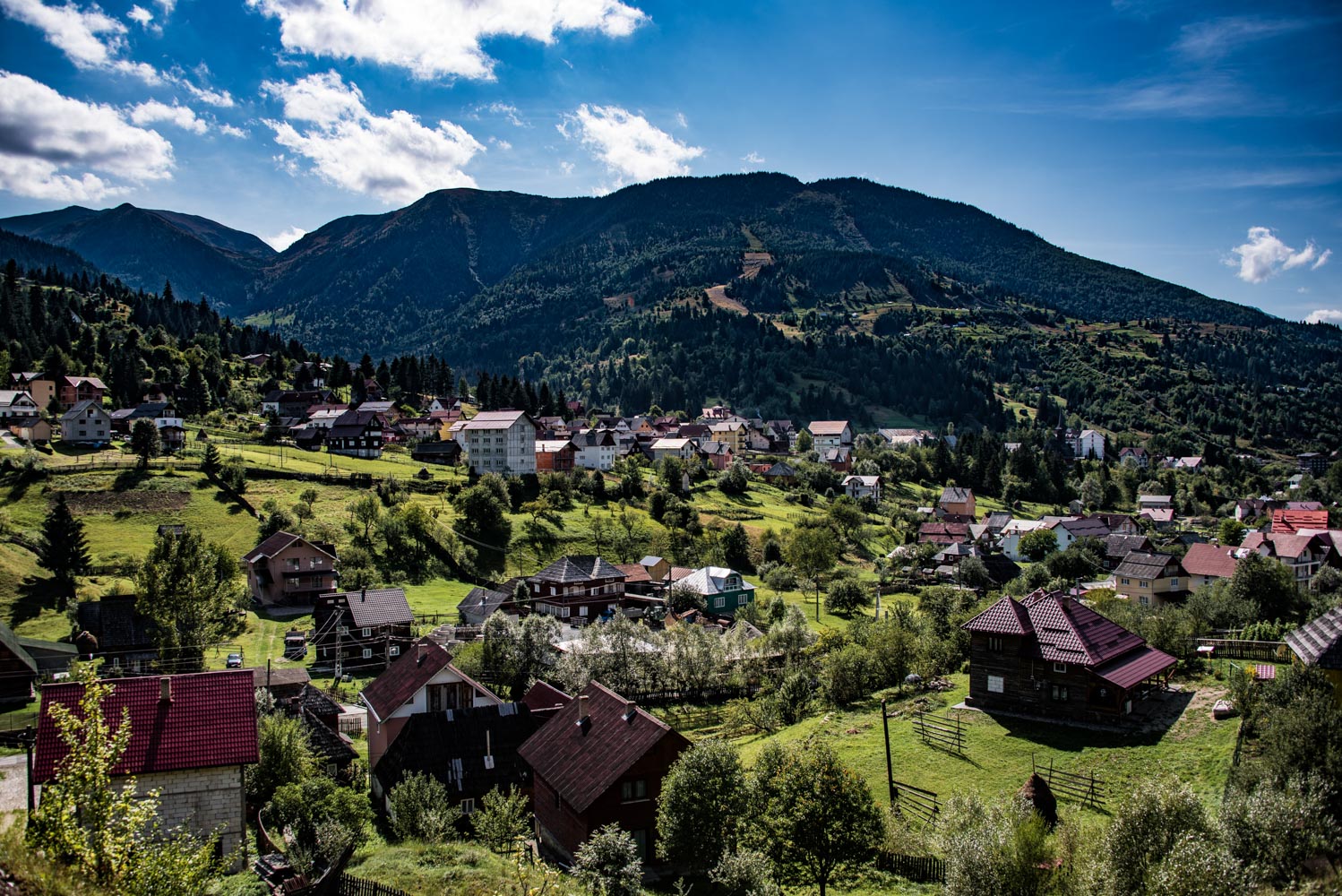 Maramures — A Step Back in Time

Over the highway on the road through the hills heading north from Cluj-Napoka is a large  wooden arch on which is carved ‘Maramures,’ to announce our entry  into this distinct region of northern Transylvania. Maramures proved to be a treasure trove of unusual experiences. 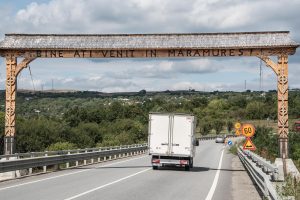 The hilly countryside gave way to a valley of small mostly farming communities of houses with gray asbestos roofs, bunched together and built close to the roadside, with a variety of fences to mark the properties – wooden picket, wire, and decorative iron and concrete.

The region of Maramures is unique in its rural culture, manner of dress,  lack of farming mechanization and customs – what one would call ‘the old ways.’ Older women dressed often in black with below-the-knee skirts and headscarves, men in long overalls, sometimes with felt vests, reminded me of photos of Europe in the early 20th century. However, modern ways creep in — some young women dressed in skinny, ripped jeans contrasted with older traditionally-dressed women as they passed each other.

Along the road in villages were benches, with mostly older people sitting and talking. I assumed they were bus stops. Our guide Nick  told us that neighbors gathered on these benches just to sit and talk to each other. He called it ‘Romanian Facebook.’

Maramures is famous for its wooden churches with tall spiked spires  that touch the sky. The UNESCO-designated world heritage site — Barsana Monastery — is a stunning all wooden complex that exhibits both eastern and western architecture.  This visual knock-out evoked a religious magic kingdom that draws thousands of visitors throughout the year.

Another distinctive attraction of the region are elaborately carved grand wooden arches marking the entrance to properties of some residences of apparently wealthier owners. 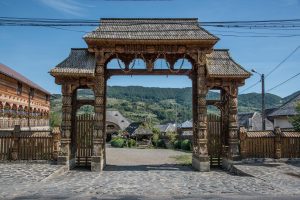 We learned about the four-stage process of harvesting and drying hay, much of it done by hand, and the classic haystacks and drying bins were everywhere.

The popular national alcoholic drink of Romania is tuica, a potent plum  brandy, and this moonshine is made in many households. We visited the home and business operation of Niculai, a one-armed entrepreneur with an array of businesses that served the community.  A distillery, a wood milling shop, a felt-making operation made out of wood blocks that pummeled the wool to make traditional clothing, and two turbulent whirlpools for cleaning rugs, were all powered by elaborately diverting part of the river through hand-dug channels and manually operated dikes. Of course, he and his wife also grew their own food and tended farm animals.

We enjoyed a homestay one night in the village of lza with John and  Sylvia and four other Romanian guests, now living in Germany. A three-piece band with John on the drums and four young dancers in folk dress demonstrated Romanian folk dancing and singing. After Sylvia cooked us a delicious pork and cabbage dinner and John plied us with his own homemade hooch, the dancers got us up on the dance floor!

Then there is the offbeat Merry Cemetery in Sapanta. Each grave has a  wooden five-foot high blue marker, with a colorful hand-painted carved scene, accompanied by a funny epithet about the deceased – their careers, what they enjoyed in life, and sometimes how they died. Humorous scenes showed people being hit by cars, trucks and trains, struck by lightning, or drinking too much alcohol. What a whimsical way to pay tribute to the newly departed.

On the other end of the emotional spectrum was the visit to the Anti- Communist Museum in the town of Sighet. Housed in a former prison  for dissidents, the Museum told the horrific story of the post-WWII  communist regime’s iron-clad grip on the country. Each cramped windowless cell  we stepped into chronicled a different aspect of the devastating effects on daily lives in this tragic period through photographs and texts (in Romanian, but with descriptive and graphic photos). Walls of photographs of executed men and women, and even children caught up in this tragedy, plus the leveling of cities and towns, told chilling stories.

Stunned and sobered, we welcomed  a glass of tuica that evening.

Next: Bucovina and the Painted Monasteries