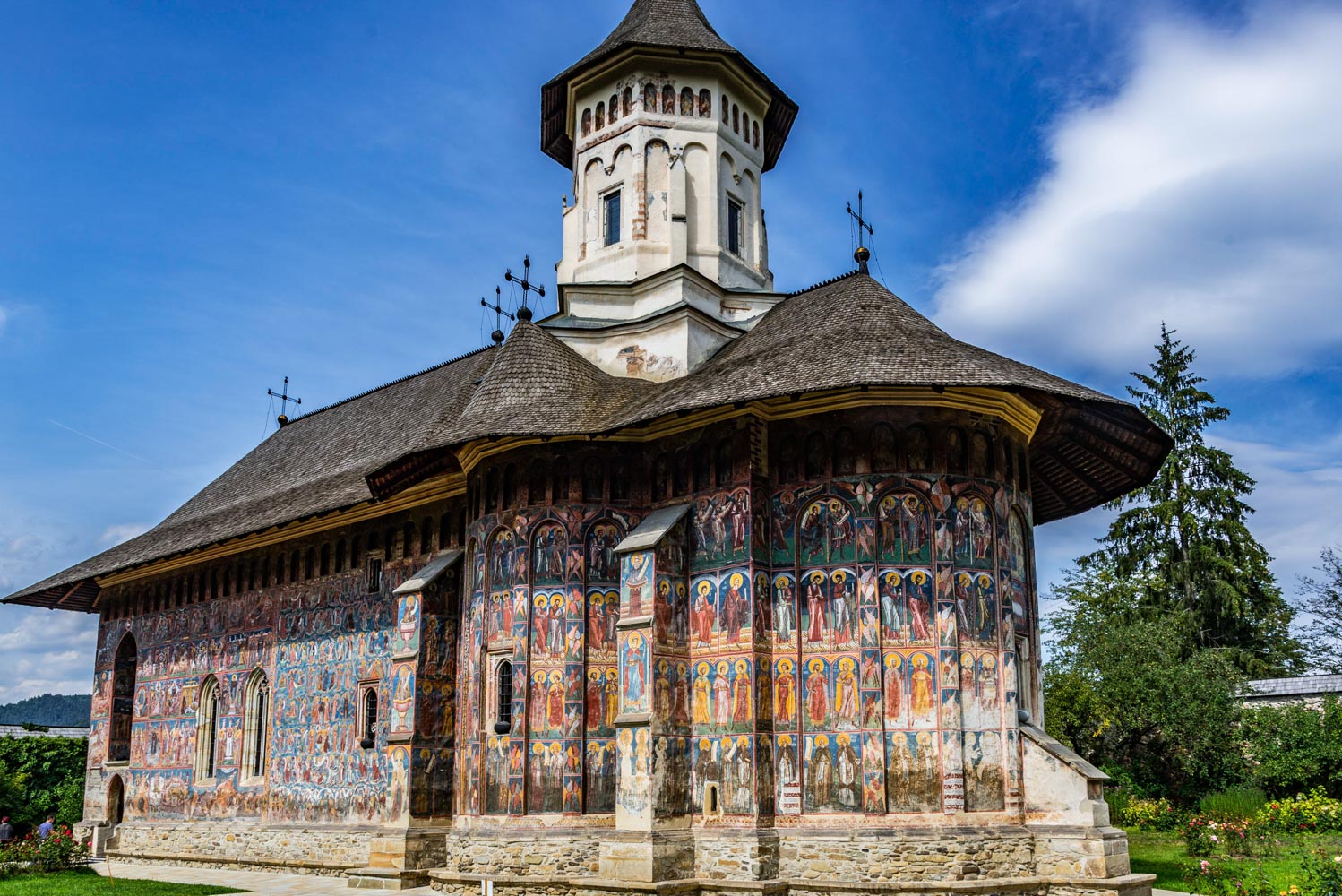 and… A Visit With Gypsies

Leaving Maremures, we traveled east across the Carpathian Mountains towards the Bucovina region, our senses overwhelmed with one breath-taking view after another. We climbed up through hairpin curves on the narrow road, and grand vistas unfolded, then disappeared around the next bend. I felt silly after a while saying “WOW!” yet again to another majestic view. 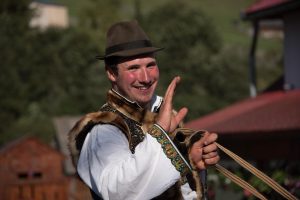 Bucovina is in the Slavic region called Moldova, with a different culture, architecture, and sometimes language from its western neighbors. Houses with more angular rooflines set back a little from the road were ‘belted’ decoratively around doors and windows with intricate patterns of raised stucco or plaster applied with templates. People wore more colorful regional clothing. There were more commercial towns and small cities.

Bucovina is the home of eight acclaimed Romanian Orthodox UNESCO World Heritage-designated painted monasteries, the chief reason for this part of the journey. We visited three of these spectacular complexes – Voronet, Sucevita, and Molovita. A visitor doesn’t have to be religious to appreciate these architecturally beautiful 15th and 16th century treasures. Typical of Orthodox churches, the interiors have painted walls and ceiling with frescoes depicting the life and good deeds of Christ and church saints.

But this is what sets them apart from other churches: their entire exteriors are covered with elaborately painted scenes that illustrate the Bible and the lives of important saints, as a way to teach the largely illiterate villagers of that period the tenets of Orthodoxy.

All of these monasteries have a common scene that takes up one entire wall – an elaborately depicted Judgment Day, with Christ at the top center weighing on a scale the recently deceased as they queue up for judgment, either earning entry to the kingdom of heaven or being cast down into the depths of hell. The frescoes are strikingly colorful, absorbing, and graphic, displaying scenes that would scare the wits out of villagers enough to compel them to lead pious lives. 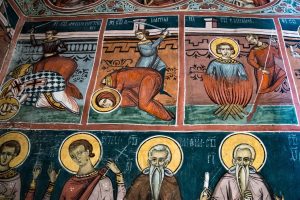 Depictions of hell were most interesting – pitchfork-wielding devils of many shapes; all means of torture – boiling, burning, hacking, flaying; gruesome animals spitting out body parts eaten from the castaways. Heaven was pleasant enough, with the requisite angels fluttering about, choirs singing, rewards being granted, nice life being enjoyed eternally by all.

I was particularly drawn to the Ladder to Paradise fresco. Supplicants seeking entrance to heaven climbed the many rungs of this ladder laid out like steps, each rung representing a life quality on which individuals were judged. At any rung, climbers could ‘slip’ as a result of having committed an unforgivable transgression in their lives and tumble, arms flailing, into the flames below. Apparently, there’s no second chance.

Throughout the day we drove through the countryside – pretty villages, farms, horse-drawn carts of people and goods, and of course, more beautiful hills tended as fields for crops or grazing.

Traveling over the stunning Carpathian Mountains again back into Transylvania, we stopped at a gypsy family’s home for an afternoon snack. There we met Klara, twice-divorced 25-year old with two children, her forceful ‘take-charge’ nature surprising in a culture that prizes male dominance. With her was her 15 year-old sister Margaret, who was eight months pregnant. Both women were dressed in brightly colored blouses and long skirts, and both were fluent in English.

What an interesting and unusual conversation we had. We learned that the gypsy culture has a caste system (centuries ago, they migrated from India), and they belonged to the caste Gabors (as in Zsa Zsa, Eva, and Magda), an upper caste of metal workers. Their family patriarch repaired cars. Gypsies keep to themselves, generally don’t integrate with larger society, and value honor and the traditional way of life. They take girls out of school at age 11-12 to prepare them for marriage — Margaret was married at fourteen to a fifteen-year-old boy. With all the wide range of topics, it was an unexpected introduction to a culture that is shrouded in folklore and our own ignorance.

Last Up:  Atmospheric Towns and Castles