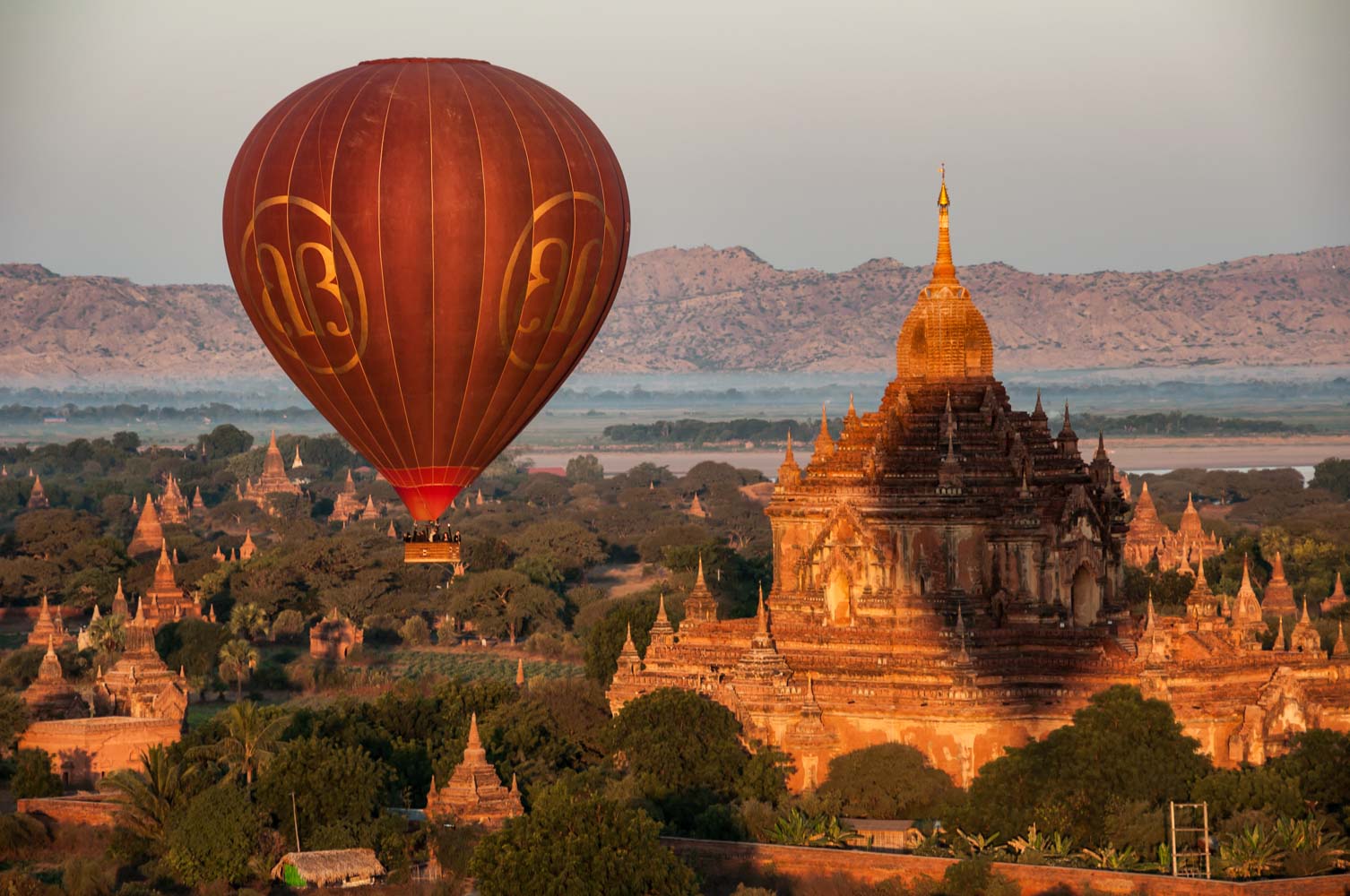 More than 2,200 eleventh to thirteenth century temples and stupas pepper the forty square miles of Myanmar’s plains of Bagan. Why are so many of these graceful, exotic structures clustered in this Southeast Asian country once known as Burma? And how does a visitor grasp the visual enormity of such a spectacle?

For 250 years, the city that occupied the area served as the capital of the Pagan Empire, a prosperous dynasty that united much of what became Burma. Religion dominated the culture, which included three major Buddhist sects, Hinduism, and native animist traditions. Pagan’s wealthy citizens built more than 10,000 temples and stupas—dome-shaped shrines sometimes holding the remains of revered priests—in what must have been a continual construction frenzy.

My guide said prominent families competed to create ever-increasing and more glorious homages to Buddha and his priests, and to Hindu gods and goddesses. A sprawling city of more than 200,000 included residences, farms, and businesses thriving among a sea of religious architectural creations. The Empire collapsed around 1287 after a series of invasions by Kublai Khan and his Mongol warriors. The city shrank to a small town, never to regain its prominence. 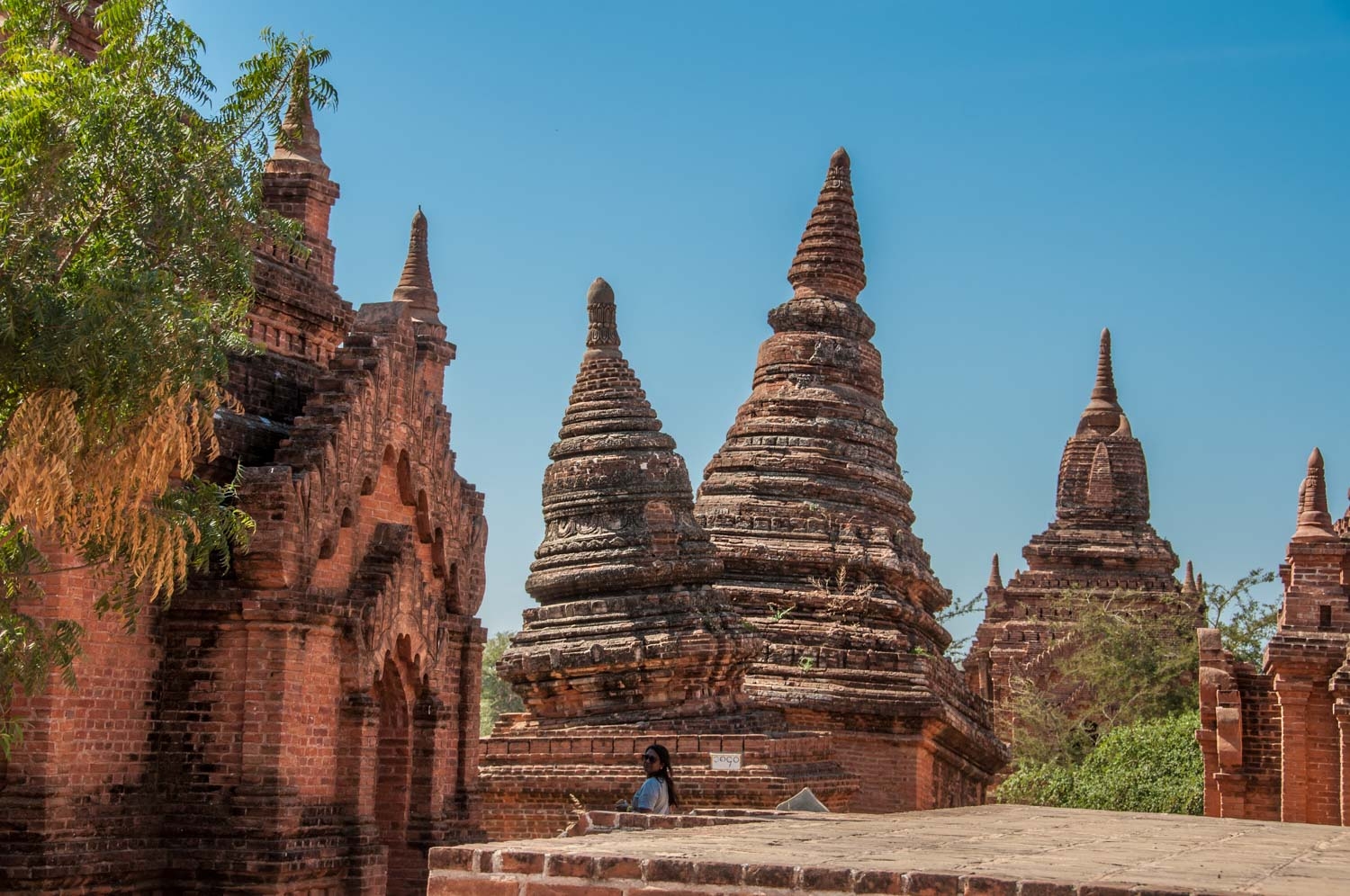 Why are only 2,200 standing today? Seven centuries have not been kind to many that disintegrated from neglect. Over time, pilgrims continued traveling to the renamed city of Bagan to visit several popular places of worship, and today dozens of well-maintained temples financed by devotees still attract worshippers and tourists.

The biggest culprit in the large-scale destruction of this sprawling historical wonder is its location in an active earthquake zone. Over 400 quakes occurred in the twentieth century alone. A single 2016 quake destroyed 350 structures. Myanmar’s military government devotes resources to restoring the most visited buildings, though art historians and preservationists globally have condemned the lack of historic authenticity of materials and design details used in restoration. UNESCO denied designation as a World Heritage site in 1996.

Despite its age, the plains of Bagan are a sight to behold. So how was I able to appreciate its scope and scale?

The Plains From Above

With traveling buddies Eva and Suresh, I arrived at the hot air balloon launch site around 6:00 a.m. The half-hour bus ride from my hotel over potholed roads in the pre-dawn dark took me past clusters of houses, occasionally lit by bright, bare lightbulbs for early risers. Voices from the streets burst through the half-opened windows, then quickly faded. 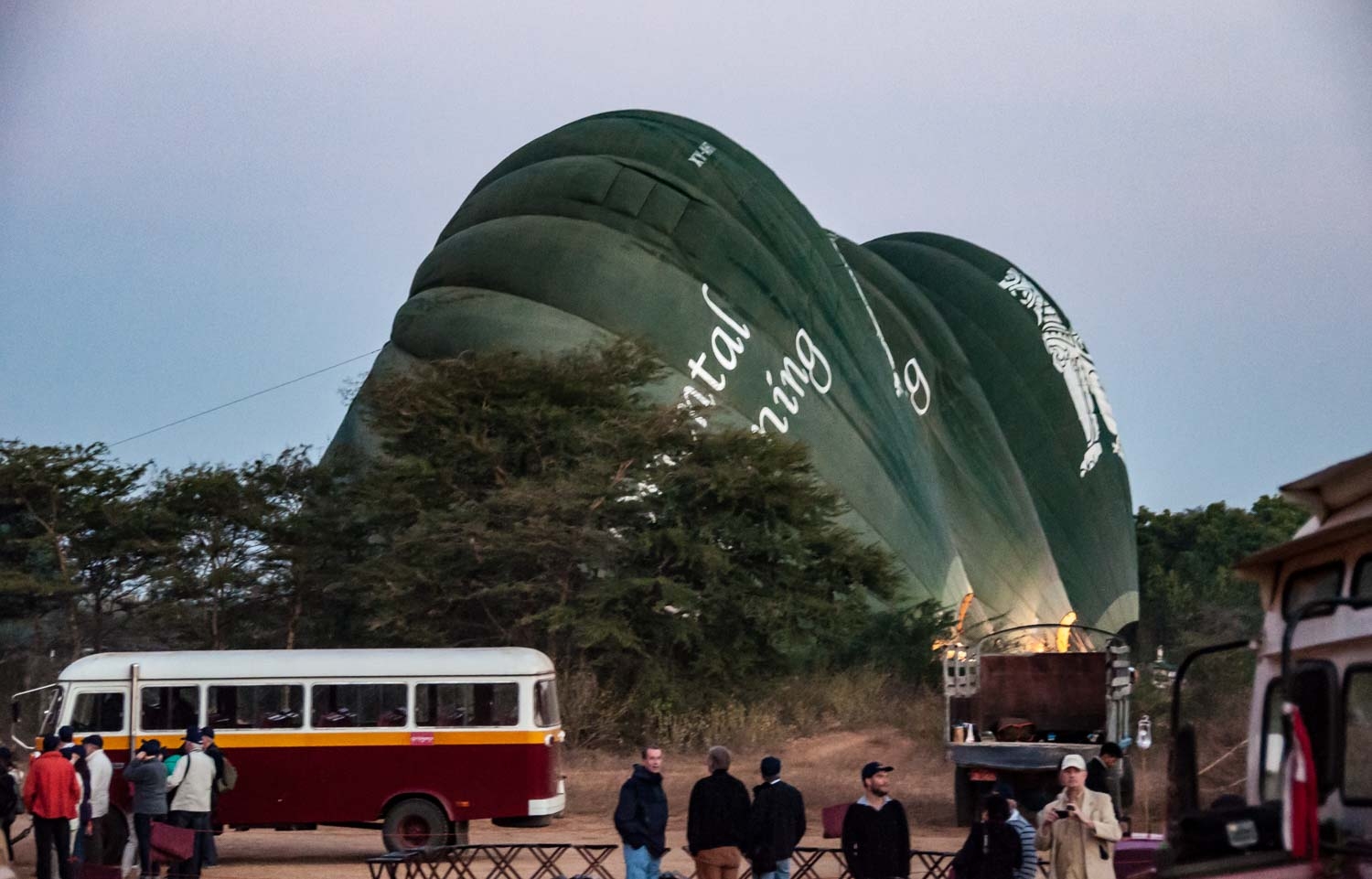 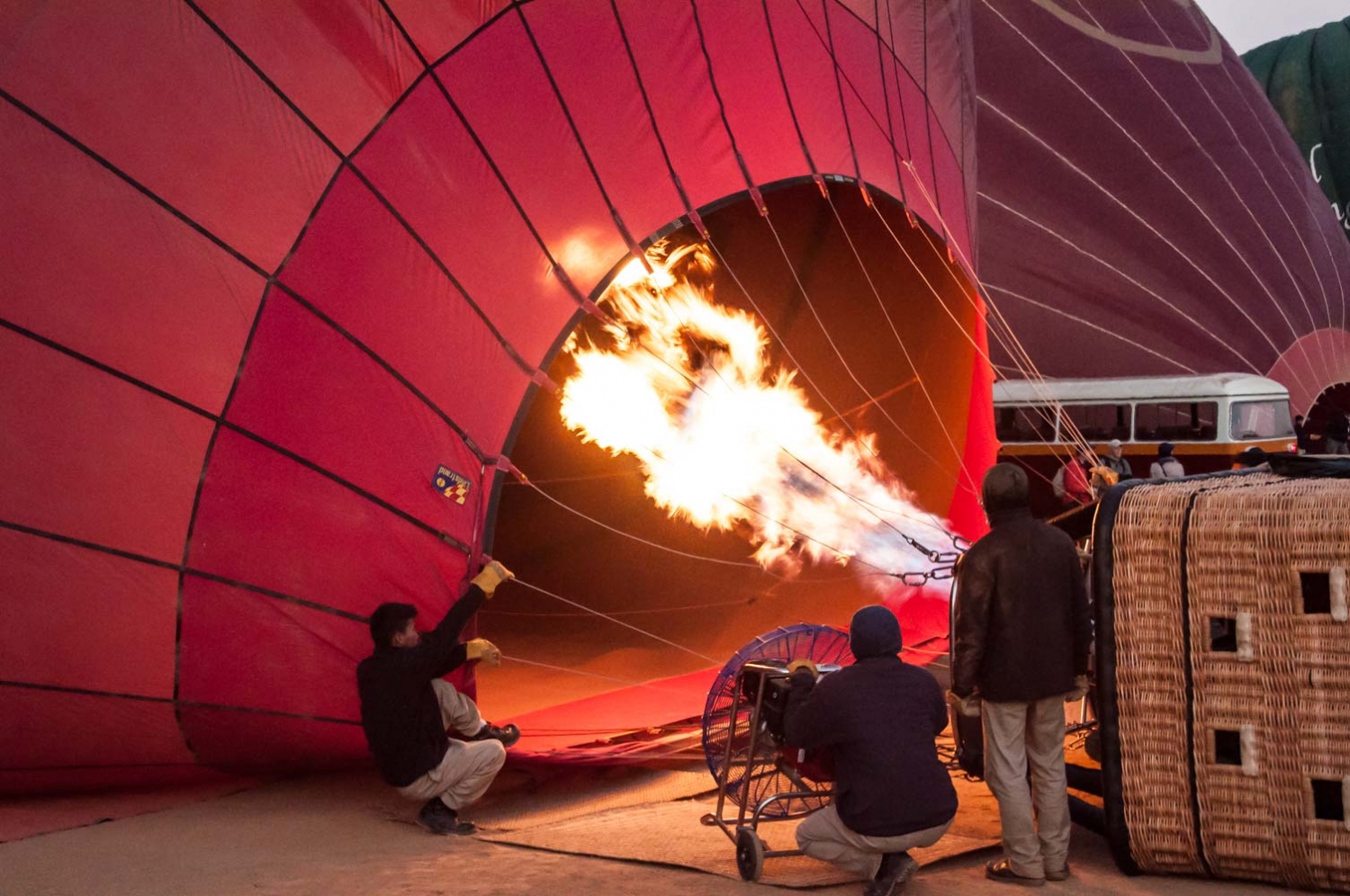 Several balloon envelopes spread over the ground, each forming a huge flattened circle. A few balloons began to bulge as the bus arrived; ground crews maneuvered giant blowers with large propellers into balloon necks to inflate them. As the balloons filled and lifted off the ground, crews lit burners that sat in the middle of each giant, wicker-covered basket for holding passengers (gondola). Heated air in the expanding envelopes kept the balloons upright.

On a signal from the pilot, sixteen of us hoisted ourselves over the high gondola walls, with four people in each partitioned quadrant. The pilot untied the tether anchoring the balloon to land and turned up the flame of our giant burner. A WHOOSH of heat increased the temperature of the air inside the balloon’s envelope. The gondola dragged across the ground for several feet, then lifted off; the surface rushed away silently. In no time, I was several hundred feet up. 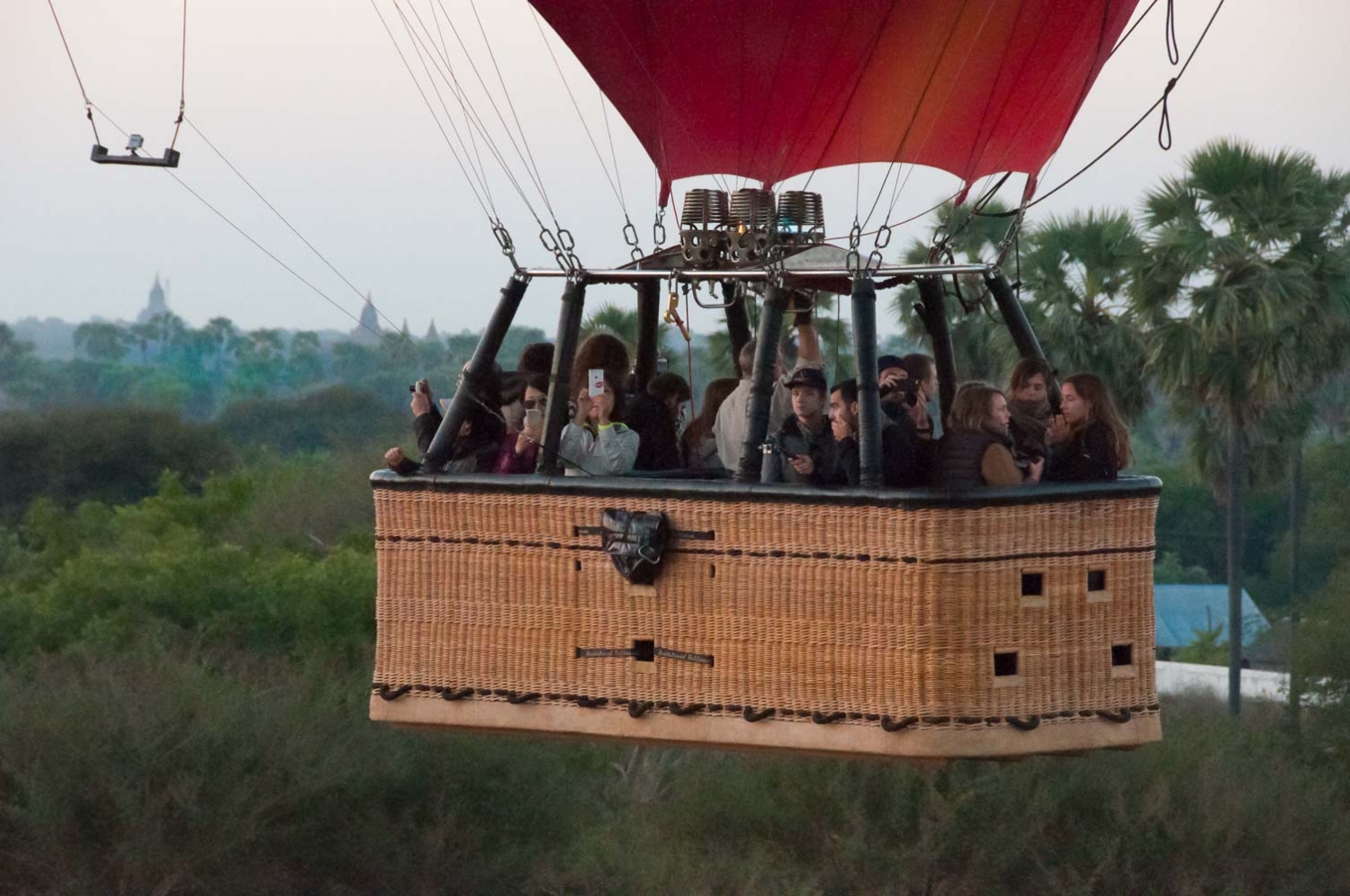 The eastern sky whitened as the earth rotated to meet the dawn. Logic gave way to fantasy, and I imagined that the sun must be only a few inches below the horizon. On the ground hundreds of structures slowly materialized from deep darkness as mist rolled and evaporated around them. WHOOSH! The furnace blasted. Everyone spoke in hushed tones, as the grandeur of the moment unfolded. 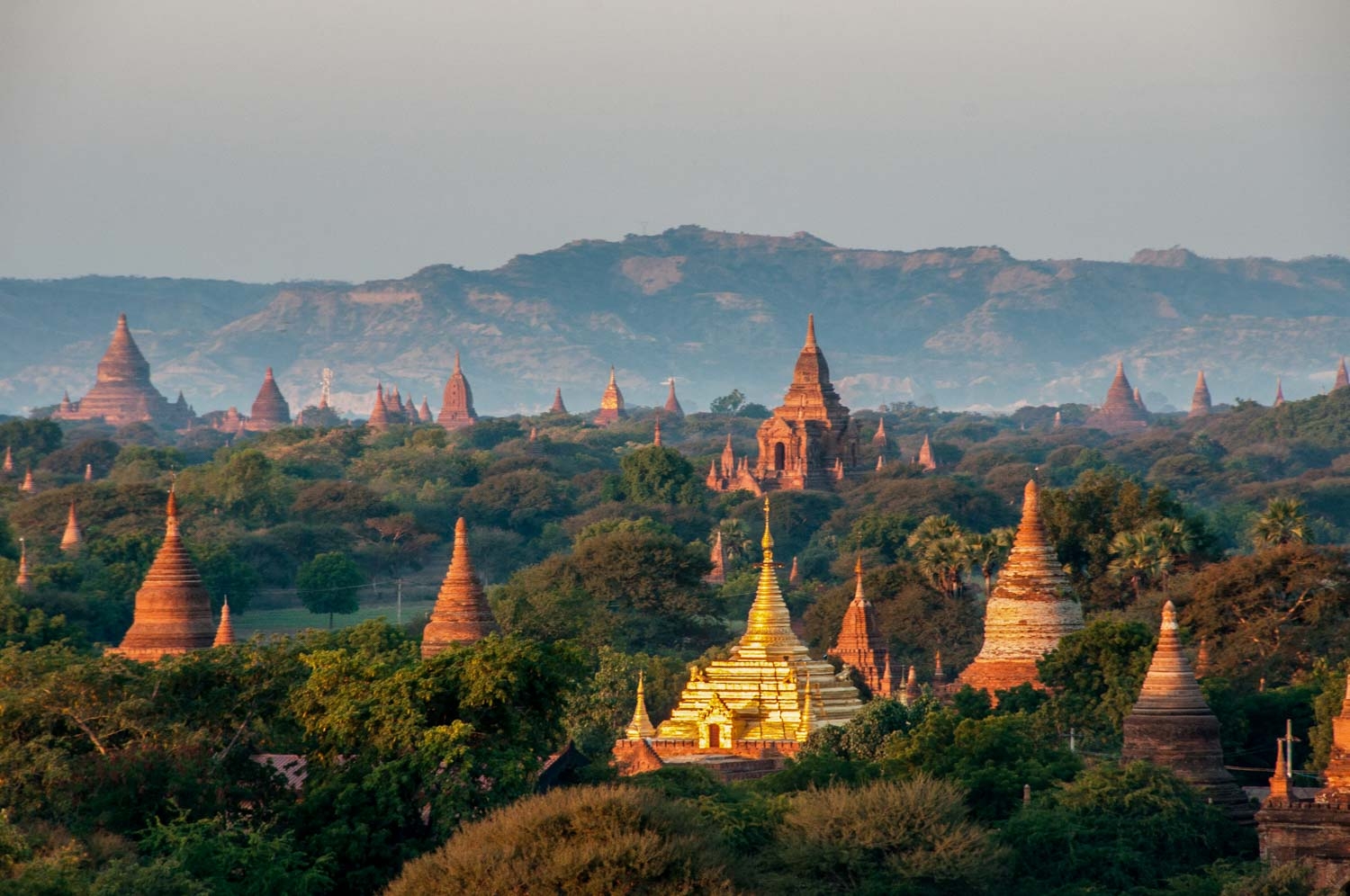 The first rays of sunlight shot across the landscape, revealing thousands of temples and stupas scattered across the plain. A few large structures covered in gold flashed into splendor, glittering in daybreak. The stupa architects intended the structures to represent Buddha sitting in meditation. Suddenly hundreds of them declared their spiritual and physical presence. As the sun climbed, I saw an armada of fifteen other airships spread across the sky. Occasionally the rising sun cast our balloon’s shadow across a temple as it drifted overhead. Dozens of tourists who had climbed to the top of a few large stupas waved as the balloon glided by. 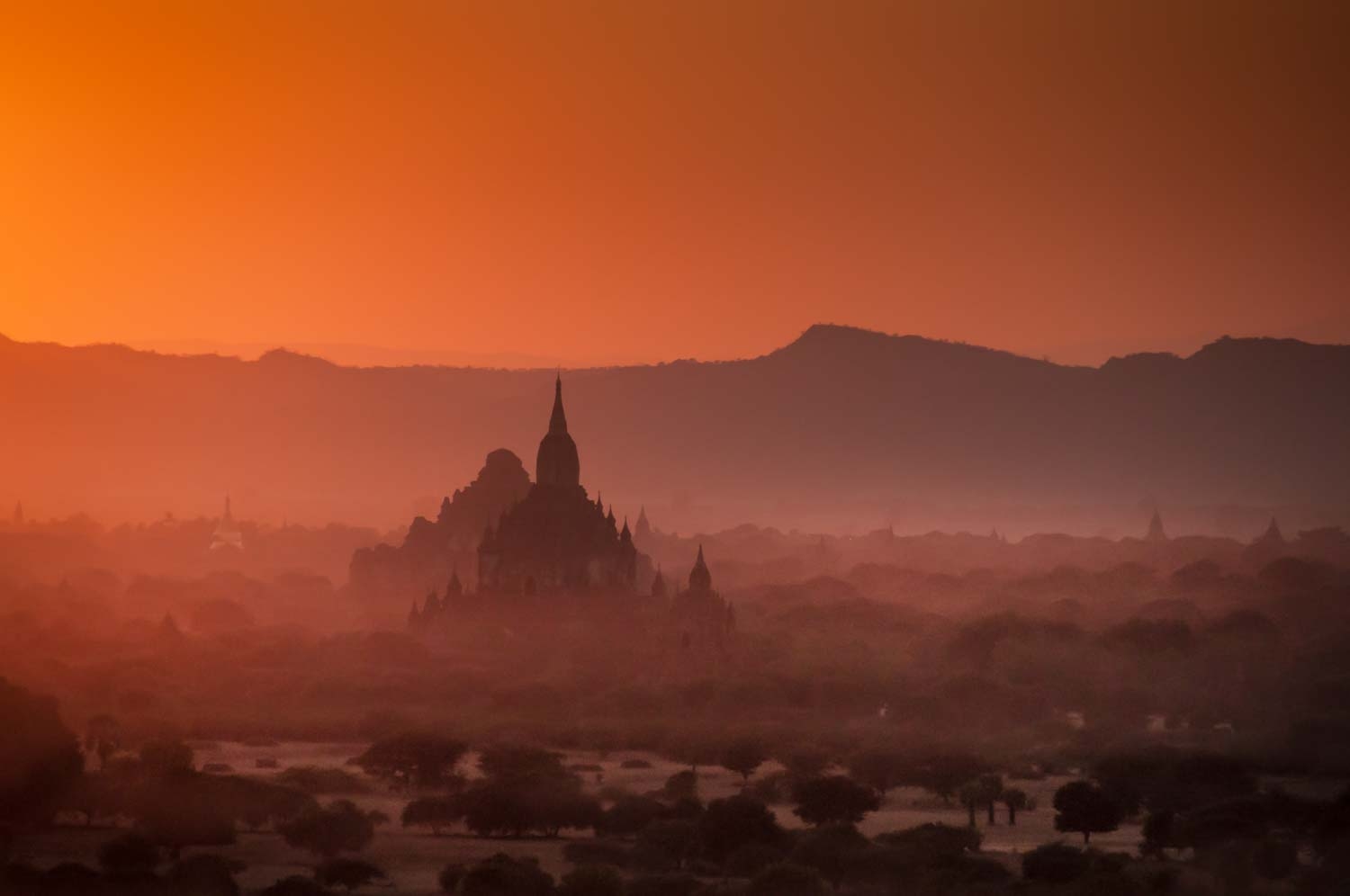 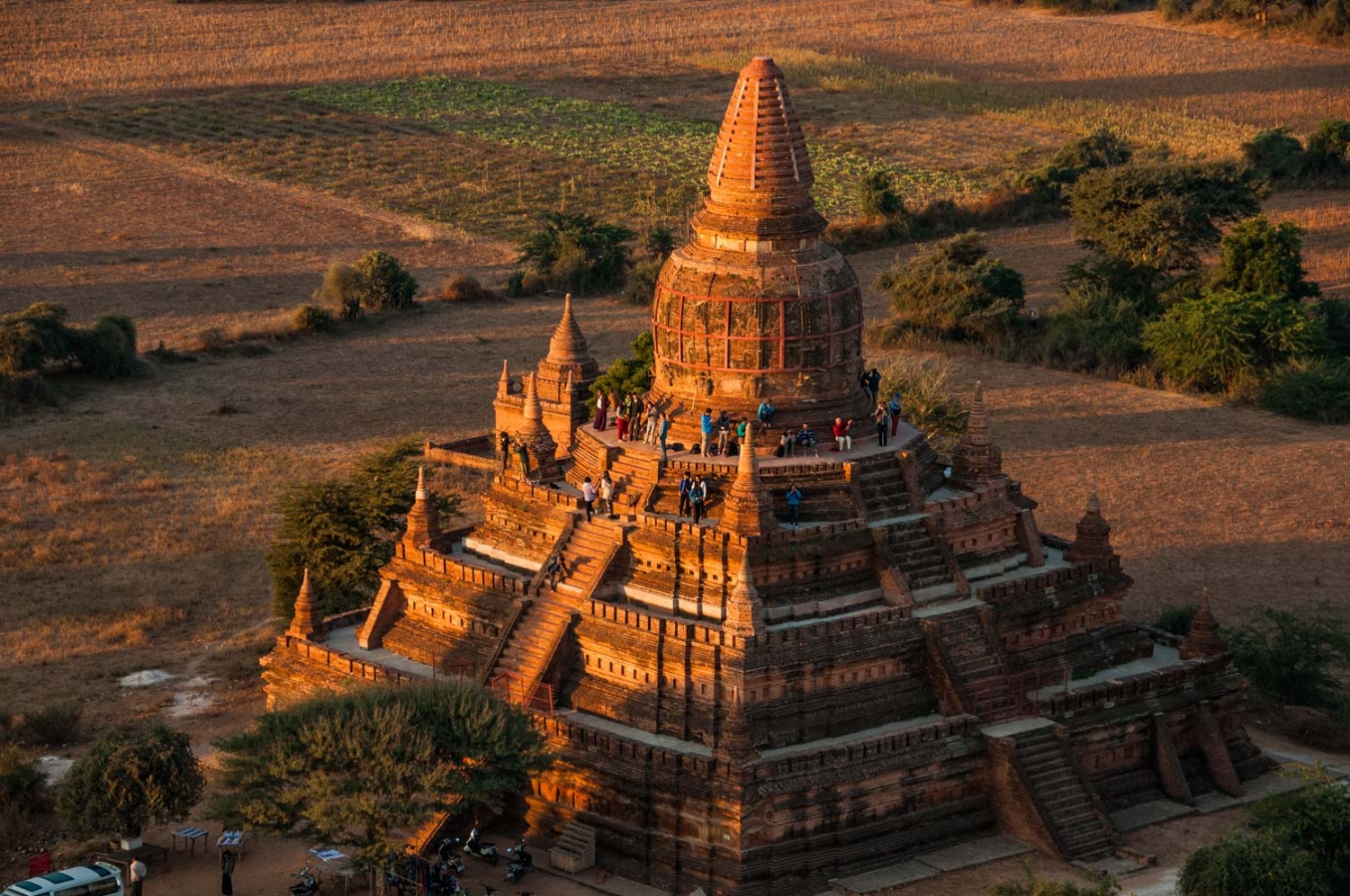 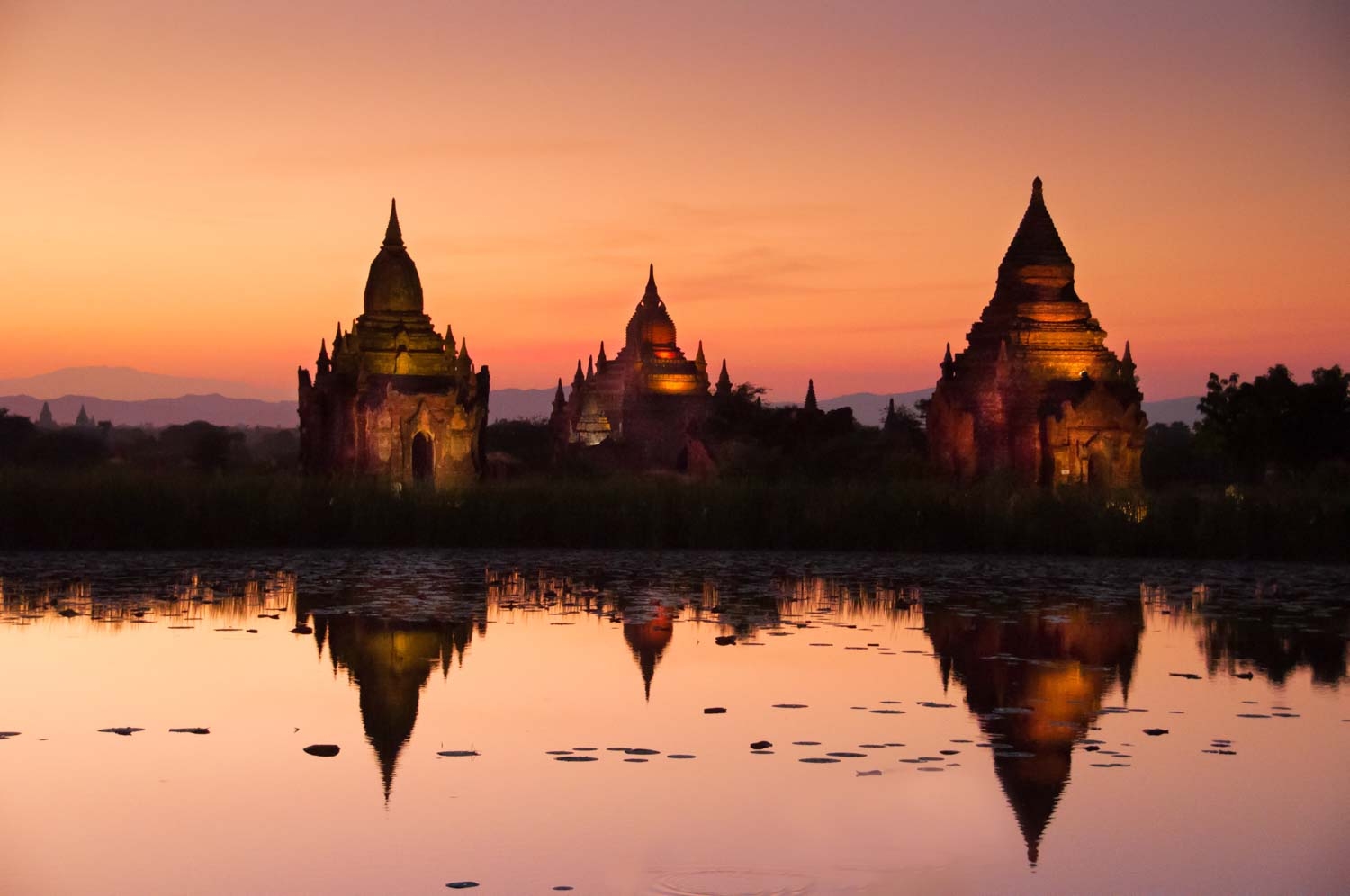 Growing light and evaporating mist revealed a neat checkerboard of tilled fields and old, cracked paved and dirt roads crisscrossing the ground among the structures. A farmer pulled his water buffalo yoked to a cart full of tools along a path that led to his field. Several boys played soccer before school started. Two men were already at work harvesting grain. A bus on the main road picked up passengers. Ever-present motorcycles buzzed along. I felt privileged to peek, almost invisibly, into the morning life of this otherworldly place. The aerial nest gave me a view of humanity’s fourteenth and twenty-first century trappings side-by-side.

A champagne toast awaited after a smooth landing. The bumpy ride on the dusty road back to the hotel contrasted with the exhilarating experience flying over the plains of Bagan. 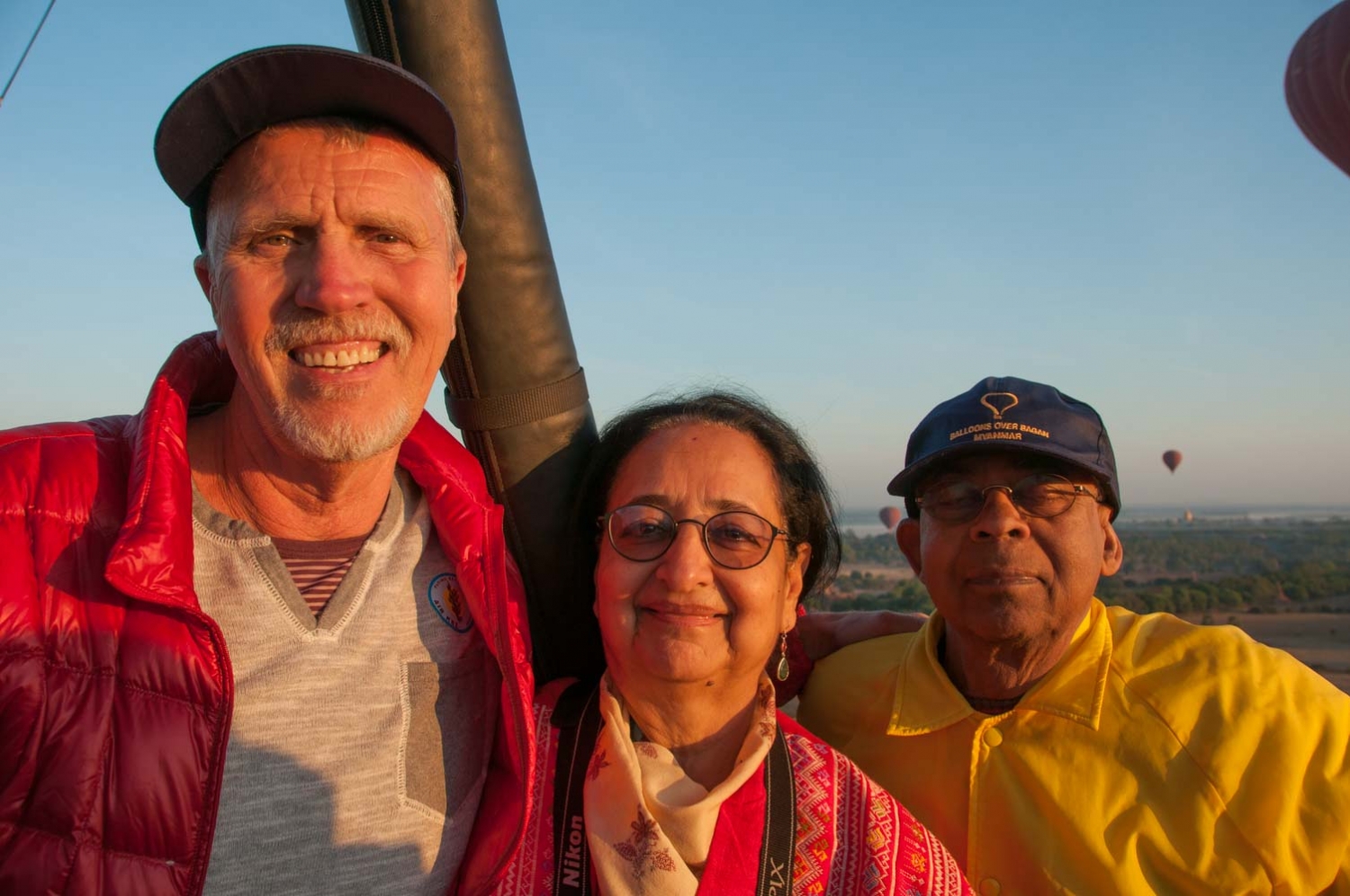 I later learned a more serious story about the plains. The temples and stupas once sat in the middle of the old town of Bagan. The government forced residents and businesses to move to nearby New Bagan or elsewhere, demolishing the old city to enhance the site’s tourism potential. My guide and her family lived in a temporary dwelling along the river for a few years until the government provided them with a home. Several times the river rose enough to flood their shelter.

Her account sobered my elated mood. The grand spectacle of the plains’ temples and stupas had come at a human cost, like so many historical wonders and technical “advances.” Understanding the backstory of the cultural treasure anchored the experience and my perspective. And it provided another lesson on the complex ways of the world.

By Plane: From Yangon, Myanmar’s capital, to Bagan Nyaung U Airport – 80 minutes
By bus: From Yangon to Shive Pyi terminal – 10 hours
By train: from Yangon overnight to Bagan Station – 17-1/2 hours